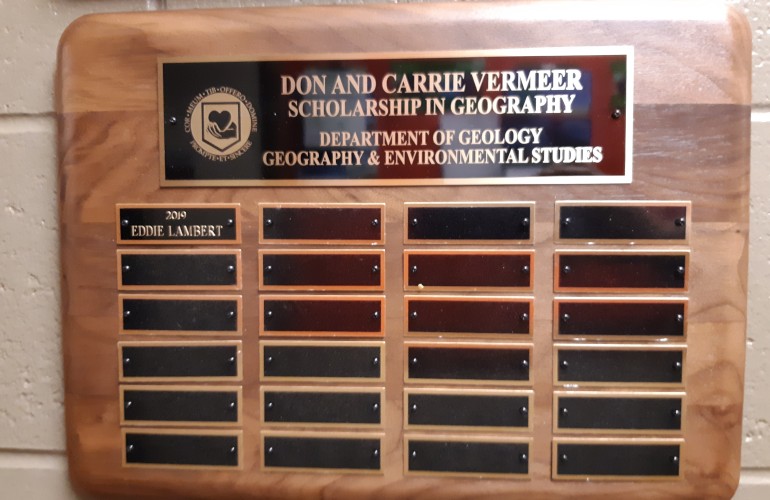 By Jason VanHorn and Natalie Vredevoogd.

Don and Carrie Vermeer have been strong supporters of the geography program at Calvin University. After Carrie passed away in 2018, Don established a Calvin scholarship in her honor. By spring of 2019, the Don and Carrie Vermeer scholarship in Geography was in place to support a student who is majoring in geography. The $4000 award, granted annually based on merit, supports a student and has an emphasis towards a theme close to the heart of the Vermeer’s–Christian thinking about geographic and global change.

Dr. Don Vermeer (PhD 1964 Berkeley) is a former professor of geography who served as Chair of the Louisiana State University Department of Geography & Anthropology and later as Chair of geography at George Washington University. His extensive publication record is filled with explorations in human-environment interactions around food and farming, especially on the African continent. He and his wife Carrie have modeled Calvin University’s goal of transforming the world for God’s kingdom.

The first Vermeer Scholarship in Geography was awarded to Eddie Lambert. Now in his fourth year, Eddie has sought to go deep in the geography major, engaged in multiple research projects. In summer 2019, he joined Dr. Jason VanHorn and second-year student, Natalie Vredevoogd, in research investigating Bible Atlases. Together, the team of researchers analyzed every Bible Atlas in print to build an extensive literature review in hopes of building a freely available comprehensive digital Bible Atlas for congregations, pastors and laity to use at any time. Eddie and Natalie will present their research work at the American Association of Geographers conference in April of 2020.

When asked about being the first Vermeer Scholarship recipient, Eddie responded, “I am very humbled to be chosen for this.” Eddie serves in many roles in the GEO Department including being a Teaching Assistant in GIS – GEO 261 and as the Student Representative in the faculty GEO Department meetings. With a knack for research, he has continued to explore various trajectories thinking about making an impact after graduation. “Any scholarship that I get is allowing me to be able to pursue more of these endeavors…” When asked what his next steps include, Eddie said, “Career-wise, I have looked into environmental planning.”

The GEO Department is deeply thankful for Don and Carrie Vermeer and for their enthusiastic support of student success and for faculty-student engaged research. The Vermeer’s have also been so gracious to provide a geographical science research fund and support for an annual lecture series on geographical change.

Although Dr. Vermeer has retired to his quiet home in Oregon, Eddie indicated he’d love to meet Don someday, “I would love it if he came to Calvin and visited, or if I was able to go out there.” Whether that will happen or not remains unknown. What is true though, Don and Carrie Vermeer have made a profound and lasting impact on the academic discipline of geography at Calvin University with their endowed funds.