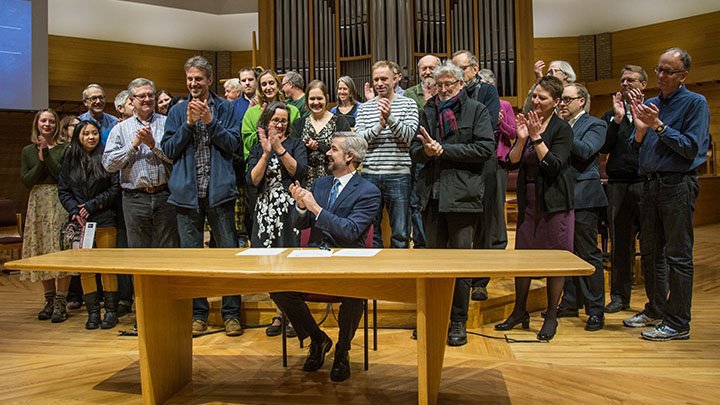 By Jack McDonough.
In a nation divided on the subject of climate change and the ways in which we achieve carbon-neutrality, what is Calvin University doing to create sustainability within our environment. What would it take for Calvin to go carbon-neutral? Although carbon-neutrality is not entirely possible for the entire university, there are aspects of campus that can be reformed to reduce carbon output.

Over the past few years a task force has been constructed to research the University’s carbon footprint as well as ways of reduction which are also cost-effective. What profesor James Skillen, a contributor to researching environmental sustainability at Calvin, found in his research was that for the past decade Calvin has been on an upward trend of reducing our carbon footprint. Although Skillen emphasized that the data was a rough outlook, he recorded that Calvin College (the data is pre-university namehood) carbon emissions are “currently estimated to be 24,690 metric tons (mtce) per year,” a reduction of over 3,000 mtce from just a few years before. It is much more difficult to record carbon emitted from Calvin commuters, so that data has yet to become available. Most of these reductions on carbon emissions have come from normal, housekeeping items that Calvin has pursued in order to improve student life, such as switching to LED lights in most of the dorm hallways.

But the task force also found ways for carbon emissions to be reduced without spending a dime. For instance, moving all night classes to one building would reduce emissions by 284 mcte as well as saving a little over $30,000 in utilities. Some of the more expensive emission projects would include things like changing campus lighting in all dorm residences to LED lighting or renovations in steam boilers for hot water, costing over half a million dollars combined. However, as both would have a quick return value within 15 years, this would be a small amount compared to some other much more expensive items such as going geothermal. And, at a reduction of 503 mtce, this makes the investment incredibly worthy from an environmental standpoint.

The data collected by the taskforce is a representation of what Calvin can do not only over the next few years but also the potential for reduction over the course of lifetimes and generations at Calvin. And because the technology investment for carbon neutrality is rapidly improving, the effect on pricing and return value for Calvin is also going a generally positive direction.

The data collected by the taskforce is organized in a document called “Environmental Sustainability: A Roadmap for Calvin College” (keep in mind that this has been continuous data since 2016). 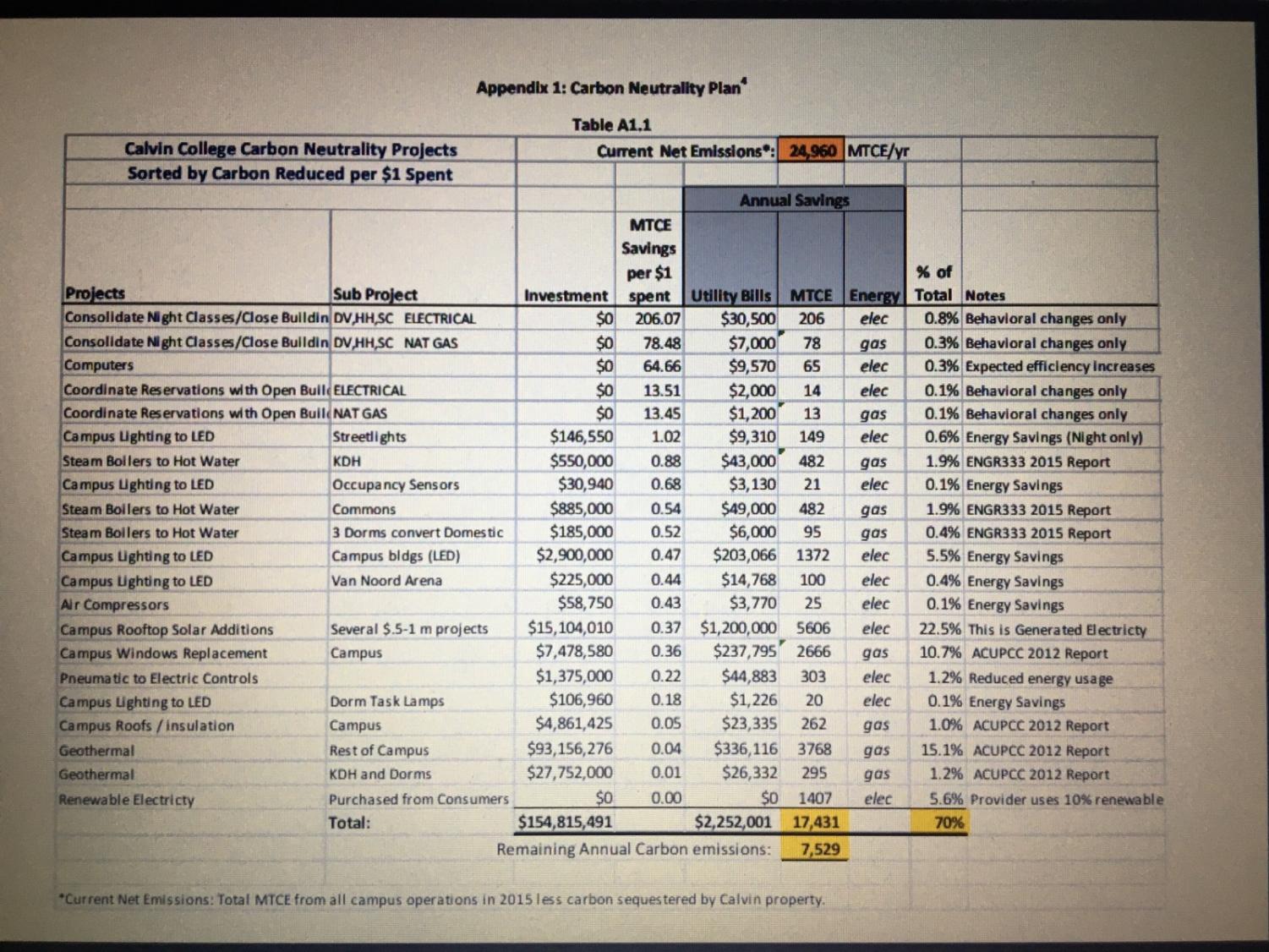 Another conclusion the task force reached was that in order to continue on the same trend, Calvin should appoint a director of sustainability who would coordinate the tactics used to further environmental stewardship as well as plan the budgetary systems for enacting those tactics.

What’s important to note is that 100% carbon neutrality is not possible for Calvin University to accomplish, nor is it possible for any human to reach this level based solely on human capabilities. But Calvin University can move forward exponentially in reducing the carbon footprint and create ways to grow environmentally conscious of actions.

When discussing with professor Skillen ways that students could contribute to carbon reduction, he pointed to a direction few people really consider: their diet. Skillen says that “all energy transfers are inefficient.” At some point in the cycle, energy is lost. This is true for anything chosen to take physical sustenance and energy from. How much more so than when another energy-transformer is thrown into the mix? A collected database called TheOilDrum, which discusses energy and or future, supports this reported loss of energy from animal product consumption. They also cite data from a Berkely study which compares the energy production of corn because the subject of ethanol is an incredibly combative area of discourse. To produce one pound of corn approximately 0.43 kWH (a unit for measuring energy) is used. To produce one pound of beef it takes 31.5. This leads to corn having an energy efficiency of 102% and beef having an energy efficiency of 4.3%. They also pull data on corn ethanol

This huge difference in energy points towards vegetarian items being an excellent source for reducing personal carbon emissions. The study suggested that there is an estimated 90% decrease in energy used by vegetarian consumers than by the average American diet. This data points to changing diet as an effective way to create carbon conscious habits. As much as a change in diet may seem foreign or even met with negative feedback, it is suggested that little changes rather than rapid ones are a good way to dip toes into the pool of vegetarian or carbon-conscious living fin considering personal impact and choices.

Carbon-neutrality remains a conversation in public discourse and, consequently, politics, even Calvin politics, which can be roadblocks for impact or compromise at times. However, Calvin forces in administration and the like have made conscious efforts to gather real results in their goal for carbon reduction, environmental sustainability, and especially how Calvin can have a positive impact on a communal scale as well as global. This upwards trend of carbon reduction, combined with the research of Skillen and his colleagues, has the possibility to create a carbonless Calvin. Calvin students also have the ability to explore ways of personal reduction. From turning fans off when leaving the room to even changing diets in little ways that create much larger impacts, there are multiple ways to engage in positive protection of the planet and producing an environment in which all may desire to live.

Additional information about Calvin’s plans for sustainability can be found at the following link. https://calvin.edu/dotAsset/aa1849f5-915f-4a53-9fcf-79e80c6449d5.pdf