Who owns the North Pole?

The Arctic Ocean is in a state of thaw. If all things hold true with current trajectories, the ice melt in the Arctic Ocean by 2050 will have redesigned the geopolitical landscape of the North Pole. New shipping routes, fish harvesting, and precious mineral resources of oil and natural gas will be exposed for extraction. But who is in control of this space and who has the rights to this precious place?

It may be that ice melt will redesign geopolitics. Or perhaps, geopolitical struggles will be solved before we see seasonal passage in the Arctic waters by 2050.  We don’t really know.

There are five countries that have shores on the Arctic Ocean and eight that are geographically situated in the Arctic Circle. The Arctic circle is drawn at about 66.5 degrees’ North latitude. The countries with shores are the United States (Alaska), Canada, Denmark (Greenland), Norway, and Russia. The other three in the Arctic circle are Iceland, Sweden and Finland. All eight of these countries constitute the Arctic Council, which is a forum for discussion of Arctic issues and include representation of indigenous peoples rights.

In Geography 110 – World Regions, I instruct students on the internationally recognized EEZ’s, the Exclusive Economic Zones, which stipulate a 200 nautical mile distance from countries into the oceans, as their exclusive waters and seabed – countries decide in this zone what is allowed regarding extraction of resources. In this zone, the first 12 nautical miles from the shore are considered territorial waters and international law in UNCLOS (United Nations Convention on the Law of the Sea) stipulates that another country may innocently pass in these waters if they are expedient and their passage is conducted in a non-provoking manner.  When the EEZ distance is shortened because of the proximity of another state, then the EEZ is split between them or all involved. Beyond these zones are International Waters. These somewhat unregulated waters still have some protection in the seabed below, beyond the EEZ, which are regulated by the United Nations.

The North Pole currently resides in International Waters. The future holds uncertainty of this position.

Because of consistent ice cover in the Arctic Ocean, the EEZ’s in this region have typically been restricted geographically.  The ice restriction limits navigation of seaworthy vessels and that has caused numerous claims and challenges for ships wanting passage through the territorial waters. But the real concern is with the ratification of UNCLOS and what that means for an extension of the EEZs.

UNCLOS gives provision for the five Arctic shoreline nations to have rights in the Arctic circle. However, there are also provisions which allow any of these five countries to claim additional seabed authority based on continent shelf distances beyond their EEZ boundary by submission under UNCLOS to the Commission on the Limits of the Continental Shelf (CLCS). The rules state that once a country ratifies UNCLOS, they have 10 years in which to make their case to claim the continental shelf sea bed beyond their EEZ boundary.  All but the United States have ratified UNCLOS. The rest have laid claim in various forms of the thawing Arctic.

Russia was second to ratify UNCLOS in 1997 but first to make a claim for extension of their EEZs. Their 2001 claim was that the Siberian continental shelf in Asia extended well beyond their EEZ and gave them the rights to the seabed, including the North Pole and other areas of the Arctic. They claimed the under-Arctic mountain range, the Lomonosov Ridge, was an extension of the continent shelf from Asia and Europe and gave them the rights to the seabed and all the mineral wealth under it. The UN delayed confirmation for the claims based on the need for further research.

Norway was first to ratify UNCLOS in 1996 but second to make a claim. In 1996, there was only little concern for ice melt and a limited collection of data dissemination in the international community on climate change and its effect on thaw at the poles. Al Gore’s documentary, An Inconvenient Truth, which internationally promoted issues of climate change was not released until 2006 and it was that same year that Norway had to make a claim (10 years from ratification) and they did so, extending some of their distance beyond the EEZ including appeals in their claim to the UN for the Barents Sea. The series of successful claims processed by the UN led to peaceful results between disputes with Russia over the area in the Barents.

Canada was next to ratify UNCLOS in 2003, thus by 2013 they were required to make their claim. With ice melt in the Arctic, they put forth a claim in 2013 to extend their EEZ on the continental shelf that included the North Pole. They discounted the previous claims of Russia for the North Pole. Government officials also indicated Canadian patrol vessels would protect their claims.

Greenland is the closest land mass to the defined North Pole and in 2004 Denmark, the country that administers Greenland as an autonomous country, had until 2014 to make a claim. They did so at the end of 2014, claiming the North Pole and even beyond to the Asian continental shelf on the edge of the Russian EEZ border. Denmark has claimed the Lomonosov Ridge as its territory.

The United States of America has yet to ratify UNCLOS and has no claim of extension in the region.

Recently in 2015 and February of 2016, Russia submitted extensive data to UNCLOS, claiming a region of 350 nautical miles beyond their shore, which includes 1.2 million square kilometers of seascape. Although UNCLOS has indicated work on the claims (see the submissions here and the Chair reports here), there yet remains questions about the geopolitical control of the North Pole. 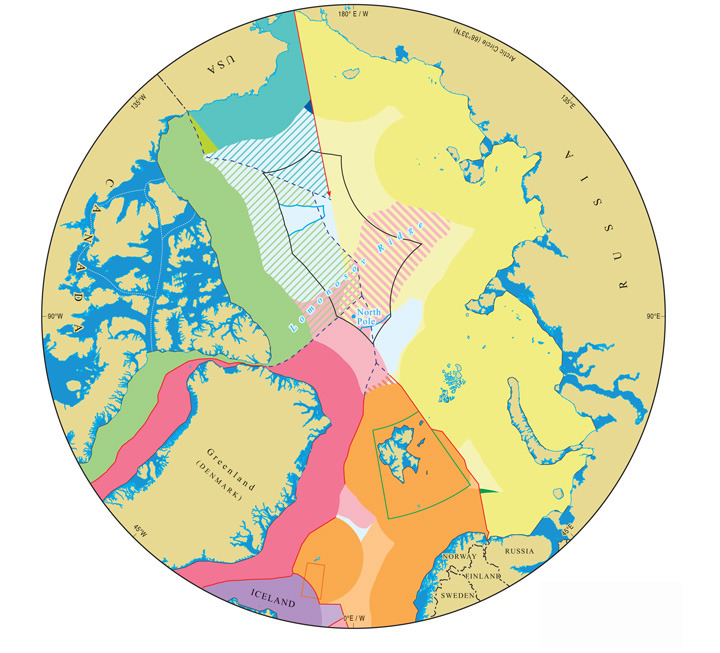 Interestingly, UNCLOS may defer to the Ilulissat Declaration. In 2008, the five Arctic shoreline countries met and agreed that moving forward, the countries would follow and agree to international law as relates to the seas. They also agreed that, “We remain committed to this legal framework and to the orderly settlement of any possible overlapping claims.”, thus setting a precedent for international cooperation and agreement as a way forward with de jure claims.

If UNCLOS rules in favor of Russia, it may invoke challenge to Ilulissat Declaration since the participants have agreed to be, “committed to this legal framework”. One wonders to what degree the Ilulissat Declaration might be effective. Certainly, it is clear that the Arctic Council was not invited, which includes representation by indigenous peoples. If the Arctic does indeed get carved up, it will be reminiscent of the tragedy of the Berlin Conference in 1884, which divided Africa among the European powers and legitimized colonization, without any representation by the peoples of the African continent.

Who will own the North Pole? Who will be committed to its preservation, despite resource extraction. Will the changing ecosystem flora and fauna be able to survive? Will humans create more chaos on the planet already in environmental and political challenge? Will the geopolitical states uphold international law, even with these valuable resources at stake?

As we move toward 2050, let us keep an eye on the geopolitics of the Arctic and engage in the conversation.